We Should All Be Included: Sharese Mathis 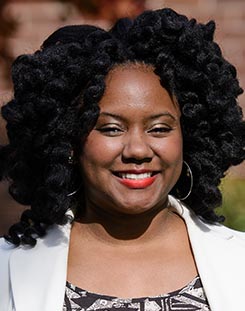 After trying various jobs selling insurance and becoming a substitute teacher, Sharese Mathis decided that that wasn’t what she wanted to do anymore.

While living in Tennessee with her husband, she decided to come home to Lansing, Mich. While her husband is working at Adrian College, Mathis found an opening for the director of Diversity and Inclusion. After getting an interview, she got the job at Siena Heights.

When she learned that the position had been vacant for a while, Mathis said, “When I showed up, I knew I could make something happen, and I did that.”

What does being the director of Diversity and Inclusion entail her to do? She said having this position means recruiting and retaining students of diverse groups, advising student organizations primarily with culture and gender, while also advising Student Government. She’s also Student Conduct administrator, which allows her to talk to the students who have trouble with their newfound freedom, helping them make better decisions.

What Mathis has done for the program in four academic years is remarkable. Starting Sisterhood of Saints (S.O.S.), which is made up mostly of black women on campus.

She’s also changed the MLK scholarship process, where before people wrote recommendations, now students have to write one themselves.

Her explanation: “I know how much heart and soul I put into it, so I want them to be able to know how to articulate and advocate for themselves.”

Before arriving, Mathis said she didn’t see many black students in leadership positions (O-Team, peer mentor, R.A.s). and now there’s a vast improvement.  She also got Hispanic Heritage Month changed to Hispanic/Latino Heritage Month, due to feedback from some of her Brazilian students.

She said doing this job does have its obstacles, mainly being funding. Mathis said she wants “people to understand that things cost money and that inviting speakers you have to pay for the hotel, gas, and still pay for the event.”

Due to that, she justifies every dollar that she spends. Another obstacle that she has to overcome is stereotypes, as she believes “they come from truth,” and not wanting to be too political “because when it comes to resources or attention or assistance, your actions speak louder than your words.”

However, Mathis’ said her main priority is the students.

Again, she said she knows she made an impact on them, “making sure they see the potential in themselves.”

For example, like helping some students of the class of 2019 graduate when they didn’t see it.  She said a great thing for her is that she still has relationships with those students today.  It’s all about love and hope, also saying, “I still learn from you all (students), even though I’m supposed to be the expert. But with this job, you can never be an expert because things are always changing.”