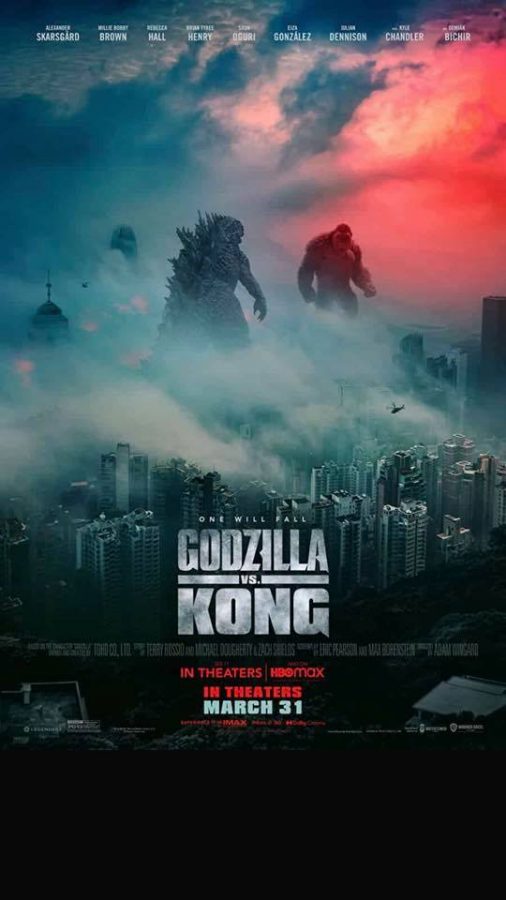 So about a month and a half ago in my “Little Nightmares II” review, I made a little joke about how the series would be more aptly named “Atmosphere, The Series.”

Well, here’s a similar idea for “Godzilla vs. Kong”: I’m convinced that this movie, along with its predecessors, is in a series that needs to be renamed, “Dumb Fun, the Monster Franchise.” Don’t worry, it’ll catch on folks. Mark my words!

“Godzilla vs. Kong” is the latest edition to Warner Bros’ Monsterverse Series that shows the famous monsters Godzilla and King Kong battle each other once Godzilla starts acting strangely chaotic. What results from this simple premise is some thrilling, eye-catching action alongside some pretty bland and boring human drama (which at this point is basically tradition for this series).

First off, the best thing about this film is that it focuses more heavily on the two titans this time around. While the 2014 “Godzilla,” “Kong: Skull Island,” and “Godzilla: King of the Monsters” focused a little too much on the human drama (in particular “King of the Monsters” with especially stupid characters), this film doesn’t do that anywhere near as much.

I can’t believe I have to say that for a film about two monsters fighting, but it’s something that needs to be said: Focusing on the monsters this time made for some colossal and thrilling action sequences. I was on the edge of my seat every time they fought, and I can honestly say I was having an absolute blast with it.

As for the human characters, I strongly advise all my readers who plan to watch this film to bear in mind that you will get attached to absolutely none of them. That’s not to say the actors are doing a bad job in their roles. It’s just that their roles in the film are pretty non-essential, (save for newcomer Kaylee Hottle who was excellent in the film).

This film has a grand cast, no doubt, but almost none of them have anything particularly special going on. And because of that, I didn’t really care all that much for any of their characters.

Another aspect of the human characters, which I found pretty childlike and downright cheesy, is the constant usage of throwaway villainesque characters in this series. One thing I absolutely adore about the 2014 “Godzilla” is that, although the movie features characters that aren’t really fleshed out all that much, you can at least sympathize with them and understand their motivations and why they do what they do.

Since the making of “Kong: Skull Island,” Warner Bros has gone in the complete opposite direction, consistently using evil-doers who make the dumbest decisions, all for the sake of having a clichéd “money matters most!” villain.

Props to Demian Bichir for giving it his all, but his character really didn’t shine, and was as lame as it gets for a villain. In general, the film’s characters and some of the humor they dish out are definitely its weakest features.

Overall, this film is just pure mindless fun. If you’re looking for a movie with a profound theme, I don’t really think I need to remind you of what kind of film this is. If you can get past the small amount of human drama like I did, then you’re bound to have a blast with this movie. It’s now streaming on HBO Max and playing in theaters everywhere. Go see it for the exhilarating cinematic action; otherwise, you’ll be sorely disappointed if you expect something more.