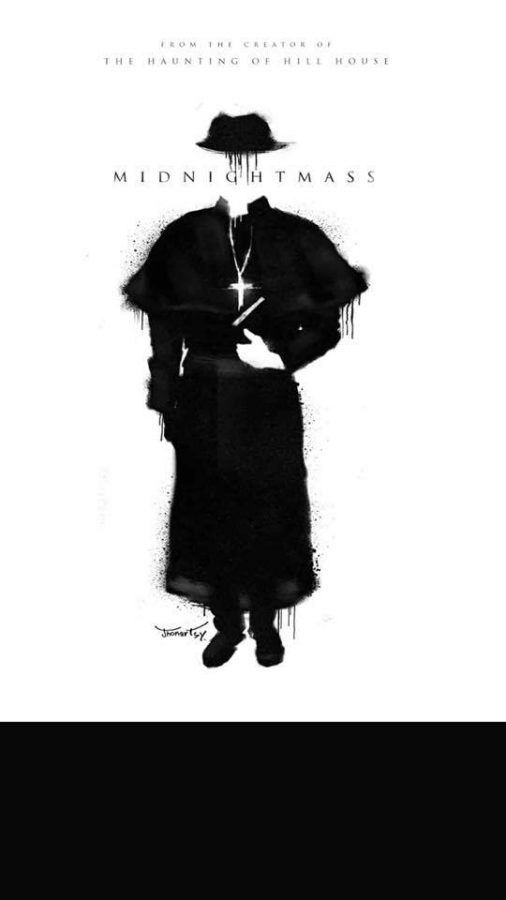 I’m going to use this introduction as a means of promotion. If you haven’t seen any of the following: “Hush,” “The Haunting of Hill House,” “Dr. Sleep,” “Gerald’s Game,” and/or “The Haunting of Bly Manor,” I implore each and every one of you (especially fans of horror) to find time to watch at least one of the titles mentioned.

I say this because Mike Flanagan, who directed all these movies/shows, is a force of nature in horror who I feel is not as notorious for this as he should be. Once you’re done watching at least one of the aforementioned titles, add “Midnight Mass” to your watchlist.

Flanagan returns to the Netflix scene to once again deliver a groundbreaking horror series with “Midnight Mass.” Crockett Island is home to a small village of religious people living a seemingly normal life. But when a young and charismatic priest arrives on their island, that normal life is turned upside down. Simple premise, right? Wrong. On the contrary, this might be Flanagan’s most deep, thought-provoking and complex work to date.

First off, I have to (in my generation’s words) simp over the phenomenal camera work on display here. In the past, Flanagan has, time and time again, showed that extremely long camera takes in scenes with little to no editing is what makes the viewer really feel the weight a director is trying to add, (“Haunting of Hill House” is a perfect example).

I am happy to report that this series proves he is still not interested in bland camera work. Even though the first episode is rather slow, it still manages to grasp your attention with the beautiful camera work that did not cut away even after 6 minutes into a shot. (See Hollywood? It’s not that hard!)

The long camera takes really give the actors a lot to work with, too; for with every expanding shot, it allows them to really portray what their character is feeling (I should know because, as a theater actor, that’s how it is on stage—there are no edits and cuts—just one long scene after another.).

It all felt so organic and real at times. Each episode is chock full of beautifully shot moments that give an emotional weight to what each character is saying and you really feel for their characters, (well, all except for Bev… damn she makes me mad).

Unlike so many horror movies/tv shows, Flanagan has always managed to make you root for and really care about what happens to the characters on screen. “Midnight Mass” is, of course, no exception.

In the first episode, the series asks you to be patient for the horror elements, using it more as an introduction to the main characters. With this, we are able to figure out who we should and shouldn’t be in support of relatively quickly, with plenty of time for character development moving forward.

Episode 5 is, by far, my favorite as it features groundbreaking performances from both Kate Siegel and Zach Gilford that left me so choked up and at the end of that episode, I felt totally connected to them both. By the end of this series, the show stayed so consistent with who we should be rooting for that it actually left me borderline sobbing. I won’t reveal any plot spoilers, of course, but let me just say Flanagan is not interested in pulling any punches this time around.

As for the horror elements in this show, Tom Long from The Detroit News said it best: “hard to watch and impossible not to watch.” For me this statement aligns with my view that some aspects of this series seem all too real.

Some of the religious leaders on the island are legit psychopaths and do insane things all “in the name of God.” Considering the atrocities committed within the Catholic Church as well as in many other religions, there were times where I felt Flanagan may be drawing parallels here, and it was arresting for me. The supernatural elements were cool, but it was the element of using religion to justify barbaric actions that really hit home for me.

To conclude, this show is simply amazing. There are moments where exposition could slightly (and I mean very slightly) overstay its welcome, but it’s not enough to become a major detractor. “Midnight Mass” is now streaming exclusively on Netflix, and I highly encourage all my readers to put this one on your radar.

To Flanagan, if for some reason you’re reading this, do not ever stop being the king of modern day horror. And keep flexing on other studios … please.