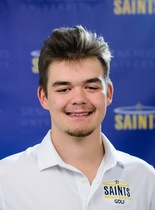 Chris Mumby, a freshman on the Siena Heights golf team, has been working tirelessly to put himself in the best possible position to help him be successful despite the injuries.

When talking about his mindset leading up to the tournament, Mumby said, “I would say I’m ready but definitely a little nervous for my first tournament as a collegiate golfer.” S

ince walking onto campus, Mumby said he has worked a lot to get back into tournament form with Graduate Assistant Andrew Ioanou. With the season nearing an end, Mumby mentioned that this offseason, “I plan to improve my game immensely throughout the offseason to hopefully be a contributing player come spring season.”