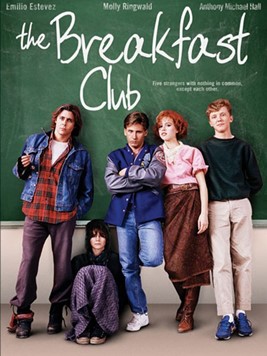 What an iconic movie! “The Breakfast Club” is the perfect teenage movie and is nostalgic for some. But does it still hold up?

To make a long story short: yeah, it does.

This cast is unbelievable. Molly Ringwald as always is fun to watch. But everyone else is so good in this, sometimes I was just smiling ear-to-ear, and you cannot help but love all these characters in some way. Judd Nelson (the rebel) is the quintessential “bad boy” trope. Ally Sheedy (the outcast) is so relatable (we have all been there). Emilio Estevez (the jock) is a timeless stereotypical jock and plays it well. The “nerd” (Anthony Michael Hall) is well, on the surface, a stereotypical nerd.

During this movie, we really get to know all these characters. And the stereotypes that they have on themselves are just on the surface. Everybody has their own story, and we shouldn’t judge others.

When I was watching the movie, I couldn’t help but smile when the dance scene came on. Oh my gosh! I was smiling ear to ear. It’s not that it is shot well, but adding the characters to the song all dancing and the characters. It is iconic. It is such a fun scene, and you want to dance with them.And, of course, the ending shots are iconic. Not only are the shots simple, but they are a way to say goodbye to the characters.

“The Breakfast Club” is just a staple in teen movies. In all the list of movies that you should see as a teenager, this is one of them. Whether if you were a teenager when it came out or my age watching it now, it is still such a fun movie. It is just fun! It encapsulates the confusing, weird, uncomfortable, fun, awkward time that is being a teenager. Figuring out who you are and realizing that people are just trying to do the same. And that other people have their own story.